Building a Habit of Gratitude 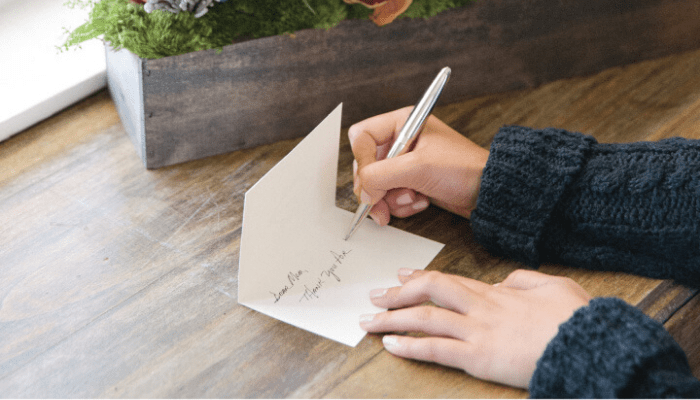 From a young age, we learn that saying “thank you” is essential. However, we aren’t taught why it’s so significant. Gratitude is the simple act of expressing an appreciation for what we’ve been exposed to, been given, or have in life. And expressing gratitude can have quite an impact on our lives. It turns out that showing gratitude isn’t only important for the receiver, but the giver as well.

As Drs. Robert Emmons and Michael McCullough described in their paper for the Journal of Personality and Social Psychology, “the ability to notice, appreciate, and savor the elements of one’s life has been viewed as a crucial determinant of well-being.” It’s a truth that’s so simple it’s profound: our happiness comes from appreciating what’s in our lives.

Stop for a minute and think about your life. Really think about it. Now pay special attention to the good parts of your life. What are you thankful for? No matter how difficult a time we may be experiencing in our lives is, there is always something to be thankful for. It could be something as little as finding your favorite snack on sale in the supermarket or savoring a funny dream from the night before. When we can proactively recognize the good in our lives, we are taking our attention away from the bad parts. This helps us prevent ourselves from dwelling on the negative and letting our thoughts about the not-so-great things fester.

Gratitude is Good for You

Learning to experience and express gratitude isn’t just good for your immediate mood. It has a multitude of other benefits.

For starters, showing appreciation for the good things in life has been found to make people both happier and more optimistic. And this trickles down to favorably influence other aspects of their lives. In another study by Emmons and McCullough, three groups were asked to write about specific topics each week. The first group wrote about the things they were grateful for that happened over the course of the week. The second focused their writings on the things that annoyed them throughout the week. The last group wrote about events that impacted them over the week, without a particular emphasis on the events being positive or negative. The researchers found that after a period of ten weeks, those that wrote about gratitude were not only more hopeful and in good spirits about their lives in general, but also saw other health benefits, such as exercising more and needing fewer visits to the doctor.

Another study performed by researchers from the University of Limerick shows how gratitude can have a lasting impact. The researchers split 200 people into three groups.  One group was asked to write in a gratitude journal three times a week and focus on good social interactions or relationships they appreciated that day. The second group was asked to keep a similar journal, only at the end of the week, they were also tasked with thanking someone in their life for something specific and then reflecting on how this voiced gratitude made both the person and themselves feel. The last group simply wrote about things that happened in their day. The groups wrote consistently in their journals for three weeks. Following the three weeks, the group that expressed their gratitude to others felt less depressed and more emotionally balanced than the other groups and when they started the experiment.

In other words, it’s not just important to feel the appreciation, it’s key to pass it along.

All too often, we enjoy a moment in life and keep it to ourselves. Maybe the server in your favorite restaurant paid extra attention to making sure you got out the door on time for the movie you were trying to make and the smoothness of the transaction eased your stress. It’s likely that you were appreciative, and went about your day with a lift in your step. But chances are you left the restaurant without letting that server know what a difference they made.  But what would happen if you did let that person know the positive impact their actions had on you?

Gratitude, no matter how small, isn’t intended to be kept to ourselves. Rather, it’s meant to be shared. And when we share it, it causes a worthwhile trickle-down effect.

In the study, Undervaluing gratitude: Expressers Misunderstand the Consequences of Showing Appreciation, participants in several experiences wrote gratitude letters to unsuspecting people in their lives and then predicted how surprised, happy and awkward the recipients would feel. It turns out that the authors of the letters underestimated the positivity with which the letters were received. Not only did they underestimate how surprised the recipients would be at the reasons that the authors indicated gratefulness, but they underestimated how happy the recipients would feel after receiving the notes. The one thing they did overestimate was the awkwardness the recipients would feel. In other words, if you’re worried that telling someone how grateful you are for them will make them uncomfortable, think again. The impact of relaying the kind thoughts to the person has such a positive impact on them that it simultaneously minimizes any embarrassment they might have considered feeling.

My 8-year-old son recently had an assignment in school that involved writing a letter to someone who directly impacted his life in a positive way. He chose to write a letter to his little sister, where he told her how proud he was of how hard she tried in her soccer game and how he was happy she looked like she was having fun. A simple message – nothing that seemed too earth-shattering on the surface. He brought the note home in his backpack and proudly told me about it. But when I suggested he actually share his thoughts with her, he was hesitant. After all, we all know how hard it can be to share this type of gratitude with others. He sat on the letter for several days. Then one afternoon, he decided the time was right and he gave it to her. Her reaction? Pure joy. It had a huge impact. She was thrilled to know the big brother she emulates both thought – and shared –nice things with her. She put it up on her bulletin board. The chain reaction didn’t stop there. As his mom, I could see that her reaction to his note impacted my son as well — and it made him stand a little taller that day. Then, a few weeks later she came home from school with her own special note for him, returning the compliments.

Gratitude can do that. It can make anyone who is exposed to it a little brighter, a little happier, and a little better off. All the more reason to express appreciation for the goodness in your life, both big and small, and then pass it along to others.

As we’re finishing the year, don’t forget to keep track of what you’re grateful for. If you can, reach out to someone who has made a positive difference in your life. Consider becoming a part of The ONE Thing community to get support in cultivating gratitude (among your other goals), or enlist the help of the people closest to you through the Goal Setting Mastery Course.

← How to Clean Up the Mess You’ve Made This Year Atomic Habits: An Easy & Proven Way to Build Good Habits & Break Bad Ones | James Clear →