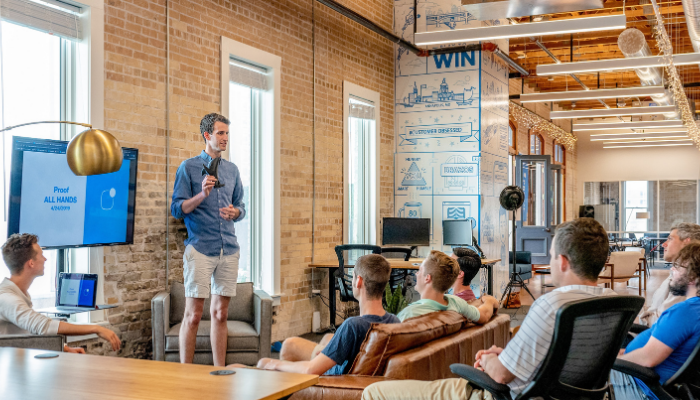 Have you ever shopped at a specific store, flown with a specific airline, eaten at a certain restaurant, or worked with a particular business and thought to yourself, “That was a fantastic experience!”? And have you ever found yourself visiting those same stores, airlines, restaurants, and businesses while in a completely different part of the country and thought the same exact thing?

Achieving a consistent experience across franchises, locations, and even huge, sprawling empires like Starbucks, Ace Hardware and Southwest Airlines is no small undertaking. It requires an incredible attention to what tangible processes and services make a business work. And at the same time, an acute awareness of the intangible aspects of an organization’s make up that deliver those experiences. In particular, the organization’s core values.

If you’ve been keeping up with our blog, then you know already that we’ve been writing extensively lately about core values. We’ve covered what they are, why they matter, and even how to apply them both personally and within teams. But if you’re really thinking big, you might be wondering how to harness the power of shared values across a greater share of people. Perhaps, at scale for organizations like businesses, charities, and community efforts.

Well, we have you covered. Listed below are our thoughts on how you might be able to make that happen.

But first, let’s walk through a brief refresher of what core values are and why they matter.

Back to the Basics with Schwartz’s Theory

The foundation of our Core Values series has been The Schwartz Theory of Basic Values. The theory attempts to identify ten personal values that are widely observed and acknowledged across several different types of cultures. The ten basic categories and what ideas and experiences each value represents are:

Most people focus on or hold more than one value at a time. In fact, several values complement one another. For instance, core values like power and achievement might work together to create a meta-value centered around self-improvement. Or values like benevolence and universalism when combined might create an over-arching value of focusing on the care of others.

To be clear, no value holds greater power than another. They’re simply motivators, ideas, and concepts that empower us to be and do our best. Within an organization, you might have a mix of any of these values that combine to create an incredible experience.

For instance, at our partner company Keller Williams Realty, the organization constantly focuses on the health and well-being of its agents and employees, as well as the clients they serve. It’s a shared core value that has resulted in some pretty spectacular examples of support.

For instance, when hurricane Harvey struck the gulf coast in 2017, flooding several million homes, the company opted at the last minute to cancel what was set to be one of the largest real estate conferences they had ever hosted. Instead, they invited all of those who would have attended to fly down anyway, and apply that energy and those resources to provide direct assistance to those impacted by the flooding. Over 4,000 attendees who bought a ticket for a real estate conference gladly swapped dress shoes for mud boots, slacks for jeans, and got to work cleaning out over 150 homes for a full week.

It was a moment that affirmed shared values, boosting morale, and in turn, showed what kind of impact the company was capable of having on the world. Had the company not made such a strong point to create a set of shared, core values organizationally, a quick pivot like this wouldn’t have been possible, and the benefits of doing so wouldn’t have been realized.

The first step to building an organization with shared values is to simply document the types of values you want your organization to exhibit.

It might sound like a simple step, but it’s an important one. As a leader within an organization, you have the power to mold the core values it represents and shares. However, if you aren’t completely sure of what those values should be and how they’ll show up in action, then it becomes a near impossible task to bring accountability to your values.

This process really requires two steps. First, sit down and make a point to draft out the values you currently feel your organization represents. Then, draft out an additional list of the values you want them to represent in the future.

Often when speaking about building company cultures, The One Thing coauthor Gary Keller shares how he went through this crucial step. As he tells it, early on his company was struggling to really take off. A big part of the problem was that the organization as a whole wasn’t working well as a team. So, he pulled all of his leadership into a room and asked them what the most important values of the company were. Simply put, “When we’re at our best, what’s the one value we’re embodying that makes it work so well?”

He went home that night, wrote out a list of values, and came back and shared it with the organization. They refined the list together, and at the end of the meeting, the company and its leadership were given a loose set of values that they would agree to exemplify and share with one another. Ideas like “Win-Win: or no deal” and “Integrity: do the right thing” became a list of values to hold the company accountable to exemplifying.

The next step is to take your shared values and start a conversation with the rest of the organization.

There are several different ways to share and communicate your values. The simplest way is to list them out and to broadcast it to the organization as a whole. Like Gary experienced, this approach is made easier if you craft those defined values with the help of the organization. This way, they won’t come as a marching order and instead as an agreed-upon ideal.

If you just google “company walls” you’ll be flooded with a cache of images where organizations have sought to paint their values on the walls of their businesses. These aren’t just design choices. They’re strategic reminders to the people working within their organization of the values that they share with one another. Within your own organization, whatever your equivalent of a “wall” might be, you should aim to provide casual, helpful reminders of your values.

Like we mentioned previously, there are no core values that are worse than others. They can all be used to help motivate us to do great things. And it’s for that reason that we shouldn’t spend a lot of effort trying to change someone else’s values. Instead, we should be looking to add people to our organizations who exemplify the kinds of values we’re seeking.

People are attracted to others who share their core values. Similarly, they can sometimes be attracted to people who have core values that they might not hold, but that might complement their existing values.

For example, when Atari was first starting out in Silicon Valley, visitors often realized that something was different about their organization simply by the way everyone was dressed. At a time when it was still the norm to wear a suit and tie to work, the company allowed its workers to wear whatever they were comfortable in. This attracted a ton of talent that was put-off by companies that valued tradition and conformity. This practice extended to other Silicon giants like Google, where allowing their employees to relax, kick back on bean bag chairs and play ping pong during the day was so attractive that it created a vacuum for talent. As a result, other companies were forced to emulate their approach or risk losing relevancy in the tech-space.

Your core values as an organization are always subject to change with or without our knowledge.

When sculpting organizational values, you have to check in regularly to see whether or not those values are still being held. The purpose of this isn’t to just hold a strict line on the values your organization exemplifies, it’s to ask yourself some tough questions:

These kinds of questions put us in the right frame of mind to continue to maintain and further sculpt the core values within our organization. More often than not, you’ll find that the core values of your organization won’t shift that much, but the way they’re showing up both inside and outside of the organization has changed. And in these instances, you should make a point to acknowledge those changes so that can incorporate them as a part of your definition of the shared value. This way, your values will evolve alongside your team.

Building core values within an organization is no easy task. When undertaking this kind of task, it’s always best to have help. If core values are your ONE Thing right now, make a point to join our Facebook community so you can get the support you need to keep it your priority!