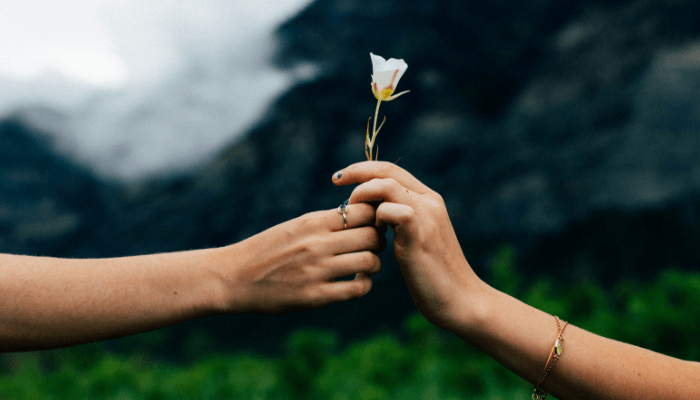 What’s both more stressful and rewarding than the holiday season? Between traveling, cooking, cleaning, gift buying, gift giving and deadlines, it’s easy to get wrapped up in our own problems.

So why not just throw out all of that stress and focus on the good stuff? This holiday season, forgo buying and asking for presents. Instead, choose to give.

Giving looks good on all of us. Doctors and researchers have found that when we give, we get what is called “giver’s glow”. Stephen G. Post, Director of the Center for Medical Humanities, Compassionate Care and Bioethics at New York’s Stony Brook University, says this glow isn’t metaphorical. It’s a very real thing.

When we give to others, our brains release a wave of feel-good chemicals like dopamine, endorphins and Oxycontin that work together to give us a feeling of euphoria, happiness and peace.

Some studies have even found that giving helps reduce the risk of mortality by alleviating stress. By taking our mind off ourselves, we get the chance to achieve some perspective on our lives and what matters. That could mean the difference between having a meltdown when a trivial thing doesn’t go our way or just shrugging it off.

If you need a little inspiration, we’ve put together a list of great charities and organizations you can give to this holiday season.

Here at The ONE Thing, we have a special holiday tradition: we forgo present swapping with our coworkers entirely. Instead, we pool our money toward something greater. Every year, our team donates to Holiday Heroes. Holiday Heroes is an organization that sprouted out of Heroes for Children that supports families with children undergoing cancer treatment. Holiday Heroes was created to help these families during the most financially difficult time of year.

Cancer treatment is expensive, time consuming, and emotionally taxing for everyone involved. Families often have to relocate for months at a time. Parents must quit their jobs to take care of their children full-time and, in regard to time with mom and dad, siblings of kids with cancer are forced to take a back seat and struggle to get the attention they need.

This leaves many families unable to afford to give their kids the holiday they deserve. Holiday Heroes helps these families take back the holiday season by connecting those who want to help with those who need it.

The process is simple. Social workers nominate certain families that they believe really need the help and the family provides a wish list. They ask for anything from a Christmas tree to books and toys to clothes and shoes. From that point on, our team is assigned a family.

We shop for things on their wish lists. After all of the shopping and wrapping is done, we throw a party for our adopted families. We want them to be able to enjoy a day of celebration where they don’t have to worry about entertaining or feeding their children. We plan games for the kids, entertain them with carolers, and provide them with a good meal. As much as this is a day for the kids, it’s also a relaxing day for the parents, who don’t have to lift a finger.

Our efforts make a difference in the lives of those who could use some help. As one social worker put it, “This family has had a difficult time since diagnosis. Signing them up for this program brought them so much joy and something to look forward to!”

If you want to contribute to this great cause, check out their website and join us!

Your Brain on Giving

In The One Thing, authors Gary Keller and Jay Papasan warn against spending life in a never-ending search for money and material things because they won’t lead to happiness. They say, “Once we get what we want, our happiness sooner or later wanes because we quickly become accustomed to what we acquire.” This idea should carry over into the holidays.

Instead of focusing on what we receive, we should focus on what we were able to give. And like all things—giving doesn’t matter equally.

Don’t just give randomly. Give strategically and meaningfully. Stephen Post says this is an important prerequisite for the giving process. If you are giving just to give, those same “givers glow” effects won’t occur.

If you need help figuring out how to give strategically, you may find help by turning to effective altruism. Effective altruism is a movement that “seeks to maximize the good from one’s charitable donations and even from one’s career.” There are three foundational principles of the movement. First, is that living in a wealthy country gives you a leg up to helping the world. Second, you can do more good if you think mathematically and systematically about where and how you do good. Last, you can do better by trying to maximize every single dollar to it’s maximum potential.

A good way to maximize your charitable efforts is to line them up with your Big Why. Your Big Why is what drives you. As Gary and Jay say in The ONE Thing, it is the thing that gets you out of bed you’re tired and stressed. It is why you are so excited about life and why you are doing what you are doing. It reveals your purpose. When deciding where to give, consider your Big Why. What is important to you? What outcomes do you desire most from your giving?

When we match our giving to our Big Why, we can set up the dominoes that lead to action.

Before you go inserting your credit card numbers into a bunch of charitable organizations’ websites, do a little digging into how that charity will use that money. Charities do a lot of good for the world, but that doesn’t mean there aren’t some bad apples in the bunch.

A Tampa Bay Time’s investigative report titled “America’s 50 Worst Charities” revealed that some organizations had been taking money through donations and never actually giving it to the efforts they supposedly support. Good Samaritans lost nearly $1 billion in the past ten years through these scam organizations. This is problematic for many reasons, and also illuminates why you should care where your resources go. There is great tragedy that there is suffering in this world, but an even greater tragedy when efforts to subdue it are squandered.

CharityWatch is a great website dedicated to investigating the actions of charities. It was founded 25 years ago and since its inception, it has investigated numerous charities to figure out where your donations are really sent. They then rate each charity based on how much of the donations they receive actually get sent to the stated cause.

Conducting some of your own research into what charities are highly rated will help you maximize your money—to get the most bang for your buck.

If giving through a charity doesn’t appeal to you, why not look around your community for ways to give? Schools, churches, and community centers have programs running throughout the year that help spread resources and money to people in need. Help out at your local soup kitchen, donate old clothes that can keep others warm during the coldest time of the year, or pass it forward. Buy the person behind you in line their coffee. Buy an extra sandwich on your lunch run for a person in need. Over-tip your server. There are so many ways to give, you just have to start looking and they will appear.

Or, reflect on those in your immediate circle who could use some help this holiday season. We all have friends and family that could use our help this time of year.

What are some ways you give to your community—big or small? Let us know on our Facebook page!

← How to Prepare For Your Best Year Yet Using The ONE Thing Why You Need Both: The Power of a Digital Calendar and a Paper Planner →