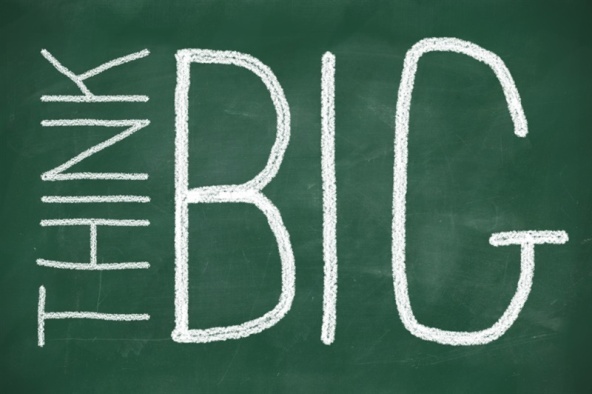 All too often people get spooked by the idea of going big. Staying small may seem safer and easier, but it also limits success. Holding on to the thought that big is bad will do nothing but hold you back.

Going Big Gets You Places

The greatest successes in history were the result of big thinking. Consider the Wright brothers. Trying to give man the ability to fly was a big idea. Bigger than most people could conceive — let alone view as a possibility. The brothers could have used their mechanical skills and determination to improve automobiles or boats, but they wanted to go bigger. Today, people don’t think twice about hopping on a plane and flying anywhere in the world.

Thinking big not only made flight possible, it opened up the world in numerous ways. It enabled more people to visit more of the world. It changed the way militaries operated. It made correspondence much faster. We’ve all benefited because the Wright brothers knew no limits.

What are your limits? There’s a good chance you’re underestimating them because until you go big there’s no way of knowing what your limits actually are. Going big expands your boundaries.

Big is about possibilities, small is about limitations. Small barely moves the needle while big puts the pedal to the metal. Going big gets you places instead of staying small right where you are. Big can seem intimidating, but when you own it you open the door to great opportunities.

Big results, the kind that are life changing and career making, start with big thinking. Until you can visualize your big outcomes, you won’t take the big actions that are needed to get there. Thinking and doing are inherently connected.

Thinking big raises your ceiling for achievement. It also minimizes the need to constantly set new goals and reconfigure your strategy so that you can achieve more. Since you’ve planned to go big from the onset, you haven’t boxed yourself in.

You only have so much time in the day, so why confine yourself to small goals when you can work towards bigger ones instead? When you think big from the start, you are putting the plans and actions in place from day one to make achieving the huge success you desire more attainable.

Ben Lecomte is a perfect example of attaining more through thinking big. For many people the idea of swimming across the Pacific Ocean is a ridiculously big idea. For Ben, it was just the start for something bigger. The long-distance swimmer is using the swim to raise global awareness and funds for The Climate Group. He’s looking at this amazing athletic feat as something that will make a bigger impact on millions of people. It’s about improving the health of all the oceans in the world. Ben is thinking of the world record setting swim in much bigger terms in order to change the planet and the lives of people for generations to come.

If you think Ben’s thinking too big, consider that he has already made history by swimming across the Atlantic Ocean to raise awareness for cancer research. Ben Lecomte understands the power of big thinking to get big results.

So when it comes to setting your goals and mapping your trajectory to achieve them, don’t sell yourself short. Thinking big makes it possible to reach your full potential and break down the barriers that have been holding back big success.

← Lie #5: A Balanced Life Using the 6 Lies for Your New Year’s Resolutions →