You Can Build 5 Habits This Year, Who Do You Want To Be? 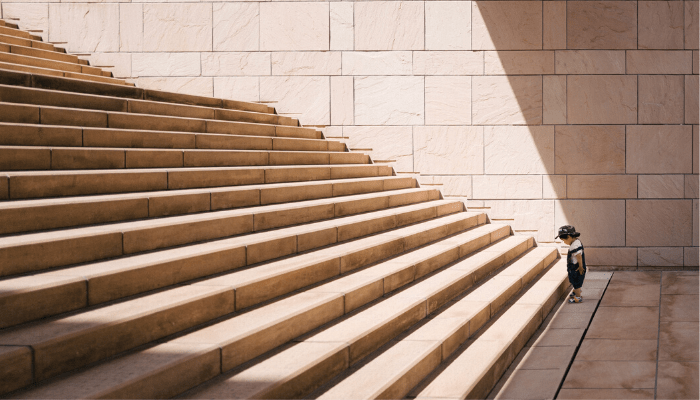 Averaging out the results of various studies on the topic, it’s a safe bet to say it takes 66 Days to build a new habit. With your year out in front of you, that leaves you with enough time to change five things about yourself, conservatively.

Five changes per year certainly doesn’t sound like a lot—and of course, there are some exceptions to the rule. However, whether we view building five habits as substantial or minimal largely depends on how we view habits to begin with. Just like everything else, no habits are equal in weight or importance.

Sure, if you decided to stop biting your finger nails, checking Facebook in public, cracking your knuckles, entering a new lane without using a turn signal, and watching TV in bed then you could probably expect the future version of you to look like the current you.

The reason is because none of those habits work toward an end goal. They’re all isolated victories that don’t have anything to do with one another. They may be positive individual changes, but as a collective group, they lack the ability to push the needle forward.

Psychologists have identified two over-arching approaches to habit building that they call “model-free” and “model-based”.

The model-free approach represents our natural disposition toward building habits. We build them because they lead to foreseeable, short-term rewards. In other words, we stick to eating low-hanging fruit. We would categorize any of the new habits we mentioned above, like curbing the nail biting or soda drinking, as a model-free approach to habit building.

Model-free approaches are reactive. We see something we want, and we take what we want. Like training an animal, we are triggered to act a certain way by rewards, and continue to reward ourselves until habits are established. And if we repeat those actions enough, we’ll continue to engage in those habits even after they stop rewarding us.

Model-based approaches, on the other hand, teach us to think with the end in mind, pushing off short-term rewards to move in the direction of long-term satisfaction. This way, our minds stay focused on the ultimate outcome as opposed to the immediate reward. Thinking of our actions and habits in this larger context makes achieving more desirable outcomes possible because, like any good story, it recognizes that our actions bear weight and can snowball into something bigger.

One of the keys to writing a compelling story, as South Park creators Trey Parker and Matt Stone tell it, is to follow the rule of “therefore and but”. Speaking to a class of aspiring writers, they share that the most important aspect of a good story is that, as in real life, the character’s actions have consequences:

When it comes to the habits we build, a lot of us are stuck playing the “and” game. Instead of creating an ongoing story for ourselves where events lead to an end, we create a series of isolated events with the word “and” wedged between them. We add one thing here and one thing there without any rhyme or reason and get nowhere fast.

That’s why creating your own story begins with a clear picture of who you want to be and sketching out a path of events that need to occur to get you to that point. In storytelling, it’s called “character development” where what we do changes who we are and ultimately who we become.

Here at The One Thing, we just call it Goal Setting to the Now.

Working backward from an end-goal, try to paint a complete picture of the path you need to take to achieve our desired results. (Check out our guide on how to do that here.) Each outcome on that path represents a habit we need to build that will allow progress to take place. When looking at the goals you’ve set for the year, you should be able to place a “therefore” between each step and see how each action you take leads to the next.

Once you start the exercise, you’ll likely see how building only 5 habits can snowball into monumental change. In fact, you might find it difficult to chart out more than 5 habits at a time.

For instance, look at the following storyboard (habits are highlighted in red):

Here we only have a string of four habits, but the outcomes produced by those habits, and the habits those outcomes lead to, are more than enough to achieve this person’s goal.

Go ahead and give it a try. Create a storyboard with yourself as the main-character, and identify the events, activities, and habits that will transform you into the person you want to be this time next year.

Facing a “But” On the Road to Building New Habits

If you can’t chart out more than a few habits at a time—don’t sweat it—chances are you’ll have a few more “buts” thrown into your storyboard than you originally intended once you get going.

No plan is perfect from the get-go. In his 1855 poem To Think of Time, Walt Whitman put it best when he said, “The earth is not an echo—man and his life and all the things of his life are well-considered.”

While contending with the new habits we’re attempting to build, we also have to contend with the old ones, our environment and the decisions made by those around us. Even if you’re back-tracking on a new habit you’re trying to build, it’ll be hard to spot every landmine on the journey ahead of you.

It’s something you should expect.

Habits are hard to break. (Is anyone else’s head filled with that 1980’s Chicago song right now?) Our brains are wired to simplify everything about our lives. These long-standing habits help us get through each day without getting caught up in every decision we need to make.

So when we try to change the habits that are part of the daily fiber of our lives, we’re asking our brains to step back in and make conscious decisions about behavior that had become automated. It’s going to push back. As Dr. Susan Courtney explains:

“In order to do something different, you have to activate a different part of the brain to override those habitual tendencies…That’s the prefrontal cortex. It keeps track of your current situation and goals, and how they might be different from what they were before.”

If you’re going to succeed you’re going to need to develop an environment that supports your new habits. If the people around us aren’t “in the know” about what we’re trying to accomplish, it can lead to tempting situations that cause us to backslide. More than that, as we discussed last month, our physical environments are built to accompany our existing habits. In order to succeed, we need to change our environment to be complimentary to the habits we’re trying to build.

But it’s impossible to see everything from the starting line.

The important thing is to be intentional with the habits you’re building by working toward a single goal. Doing so allows us to be proactive instead of reactive. Thus, you’ll be better equipped to handle those detours when they occur because you’ll already be holding our habits accountable for producing desired outcomes.

Don’t be surprised when everything doesn’t go smoothly. Just focus on building the first habit on your storyboard and adjust your actions when you need to.

The Challenge Doesn’t End After 66 Days

A common misconception about the 66 Day Challenge is that once the 66 days are up, you’re free to move on to focusing on building the next habit. While that might be the case for some, it definitely isn’t the case for everyone.

I know, we said at the beginning of this post that 66 days is a “safe bet”. But depending on how deeply rooted your old habits are, it can take as few as 18 or as many as 245 days before your brain takes to a new habit.

We can’t base our habit-building activities solely around these time-frames because they miss the point. While there are starting lines when building a new habit, there is absolutely no finish line.

Habit building is an on-going process that strengthens each time an action is repeated. There’s no such thing as a “full-strength habit”. If you want a habit to stick, maintaining a long-term outlook is your best bet. When it comes to the good ones, we should focus on making sure they’re deeply rooted before shifting 100 percent of our focus away from them.

So when can you move on to the next habit?

Overtime, the habits you build will require less effort to maintain without sacrificing results. Because once they stick, these new habits reduce our cognitive load. Like our old habits, they simplify our decisions and actions that allow us to conserve energy by using it more efficiently.

A good sign that a habit is built is when you find yourself doing something without thinking about it and in half the time it took you to do it when you first started. You’ll actually feel your last habit pushing you into the next one you need to build.

The purpose of the 66 Day Challenge is to give you a target for making substantial changes in your life. Reaching the 66th day doesn’t mean you’ve crossed the finish line. Once you build one habit and move on to the next, you may find yourself slipping or struggling with a previous habit. When that happens, there’s a good chance that the supporting habit you’ve “built” wasn’t built that well—perhaps not at all.

When that happens, don’t lose hope, maintain vigor and increase your intensity.

Revisit the beats in your storyboard and account for the landmines that caused you to trip. It’s not uncommon to find that you need to go back and build another habit before you can build the habit you’re wanting to build. Like a prerequisite course, habits are strengthened by other, complementary habits.

Remember, this is your story and ultimately, you’re the person who determines how it ends.

← Family Matters: How to Teach The ONE Thing to Your Family How to Communicate your Financial Goals with Those Who Need to Know →