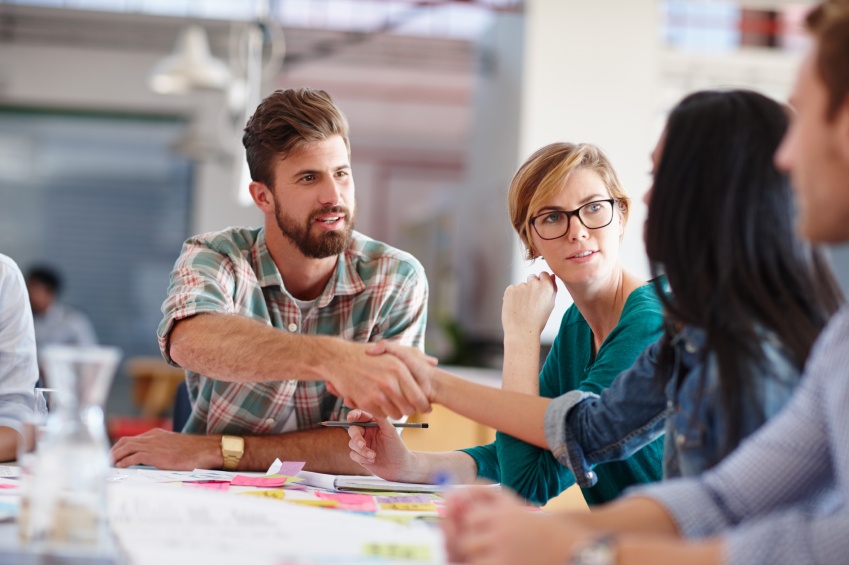 While a debate exists about how much communication is considered to be non-verbal, all the experts agree on ONE Thing. The words we speak do not convey as much meaning as our body language, tone of voice and personal interaction, which is something that the digital age will look to answer as electronic communication continues to influence how we connect with one another.

We may be able to speak to each other and even have face to face conversations when we’re thousands of miles apart, but the human touch isn’t there. It’s a personal connection that cannot be replicated by technology – at least not yet – and it’s more critical for communicating than many people realize.

For that reason, today we’re exploring how touch affects our ability to communicate and how to use touch in our personal lives to express ourselves more effectively.

The Role of Touch in Communication

Humans are the most complex and highly functioning organisms on our planet. Every cell works together with a purpose. It’s no coincidence that our skin, the largest organ of our bodies, is connected to thousands of nerves that give us the ability to perceive touch.

In fact, touch is the first sense we develop and the process begins before we even leave the womb. Even though we become somewhat touch-phobic as we age, this first language is deeply engrained in us. A 2009 study by Matthew Hertenstein found that participants were effectively able to communicate eight out of 12 emotions by using touch alone. The results of this study suggest that touch is very nuanced and a better way of conveying emotions than facial expressions and voice.

Our sense of touch is also designed to communicate clearly and quickly. It can even communicate subconsciously. Take, for example, touching a hot stove burner. Before you’ve had time to think about it, you immediately pull away from the scorching heat and understand the danger. Researchers are now finding that touch is often the quickest way to communicate, particularly when expressing emotions.

Touch is a very visceral, instinctive form of communication. It’s the type of communication that relays information instantly and causes a guttural reaction. If you aren’t careful or completely withhold contact you could communicate the wrong message without even knowing it.

Communicating More Effectively By Incorporating Touch into our Lives

In the U.S. we are touch deprived. Studies have gauged how different countries and cultures use touch in communication, and we Americans aren’t high on the list. Much of this is influenced by cultural etiquette, but that’s before people realized human contact is highly beneficial for communicating.

The five easy fixes below can go a long way in helping to bridge the tactile communication gap with our loved ones and personal connections.

1. Give someone a pat on the back when you give them praise.

Neuroscientist Edmund Rolls is an expert on the role of touch. His research uncovered that the orbitofrontal cortex of the brain is activated during touch. This is the part of the brain that controls our feelings of reward and compassion. You can increase a person’s feeling of accomplishment by giving them a pat on the back when you tell them they’ve done a good job.

Want the people in your life to cooperate with one another more? Then touch is the answer. Numerous studies, including one on the performance of NBA teams, have found that touch increases a person’s willingness to cooperate and work with others. If you plan to ask someone in your life for help, to change their behavior or consider your viewpoint, find a way to work in discreet physical contact when you initiate the conversation. The other person may not even realize that you touched them, but it will register subconsciously and create a bond.

In the American business world one type of physical contact that does happen on a regular basis is the handshake. Now that we know more about the science behind touch, the importance of a good handshake makes a lot more sense. Touch is an effective way to build trust between two people. It calms us and has even been shown to ease cardiovascular stress. So, next time you go to shake someone’s hand in addition to making it firm let it last a second or two longer.

4. Get and give massages to strengthen and deepen bonds.

Massage doesn’t just work out kinks and soothe sore muscles. It can also help us stress less and communicate better – whether we’re giving or getting a massage. The beauty of massage is it’s a two-way street. The person giving the massage is receiving just as much contact and non-verbal signals. This type of interaction can increase trust and feelings of safety. One of the most poignant studies to weigh the affects of massage came from a study conducted by Tiffany Field, the director of the Touch Research Institute at the University of Miami. She found that premature babies that had three 15-minute sessions of touch therapy a day gained 47 percent more weight than babies that didn’t receive therapeutic sessions.

5. Adjust type of touch to your surroundings.

The context we put to touch is affected by a number of things, including the location where the touching takes place. This has shown up again and again in research by Peter Andersen, the emeritus professor at San Diego State University School of Communication. Depending on the situation, touch can be perceived as threatening or creepy, especially if it’s prolonged. The safest bet in most situations is to make the touch brief and keep it to the back or arm from the shoulder to hand. These are generally considered to be more acceptable areas for touch.

And the future of touch? Tech wizards are now working on haptics communication. This is the scientific name for using touch to control devices and in doing so communicating with someone else. The field is quickly expanding now that wearable technology has shown huge success. But no matter how smart devices get at reading our movements, they’ll never be able to replace the touch of another person. That’s what you’re there for!

← 5 Ways to Get the Most Out of Your Brain How to get back on track with your New Year’s Resolution Goals →
We use cookies to ensure that we give you the best experience on our website. If you continue to use this site we will assume that you are happy with it.OkNoPrivacy policy