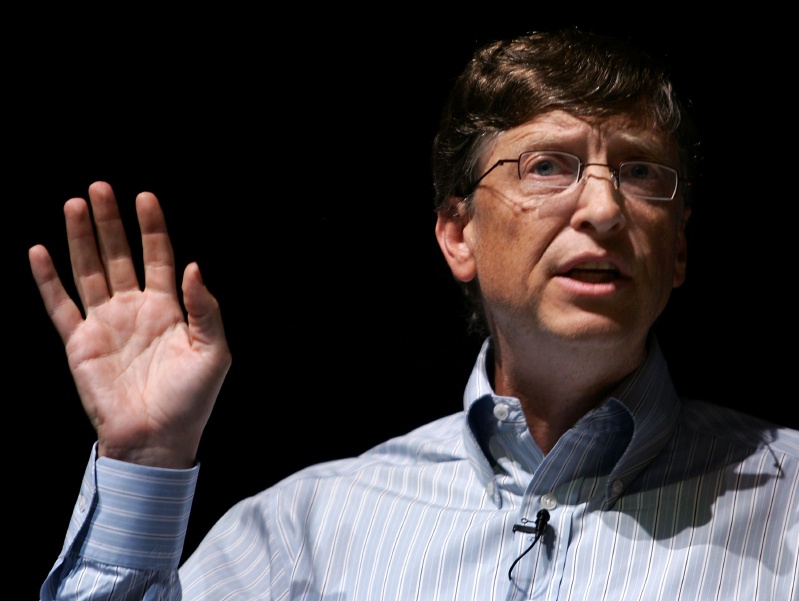 In the 2014 TED interview below, Bill and Melinda Gates spoke frankly about what gives them the most satisfaction in life. It turns out, it’s not being a software giant, wielding limitless power in the tech world, or amassing billions of dollars. Rather, their satisfaction comes from giving all of their money away and using their influence to help others in need.

The Bill and Melinda Gates Foundation is the result of Microsoft’s astounding success. In 2008 Bill Gates, one of the two founders of Microsoft, stepped away from the company to focus on the foundation.  When he made the decision Mr. Gates acknowledged that his ONE Thing had changed, which meant his role at Microsoft had to change too.

Bill Gates has reached the pinnacle of success. When Microsoft was first founded in 1975, Bill’s ONE Thing was to bring the benefits of personal computing to the masses. For him, the goal was never to accumulate staggering amounts of money or to become the richest man in the world (which Bill Gates is, with a reported net worth of $84 billion).

The vision of Microsoft was to make computing accessible to everyone. In 1980 Microsoft took a huge step forward by working with IBM on what would ultimately become MS-DOS, an operating system that enabled computer hardware to run programs. This software was the basis for Windows, which was released just five years later. That software truly revolutionized personal computing because all people had to do was point and click on items rather than type in code commands. And being software, the product was not exclusive to any specific hardware company, meaning just about anyone with a computer could download and use it.

For Microsoft it was a pivotal point that solidified the company’s position at the top of the tech industry. The technological advances snowballed, and the breakthroughs continued as one success led to another.

Bill’s goal was never to closely guard this knowledge of computing but rather to empower people by sharing it and creating ways for them to harness it. By the mid-1990s with the release of Windows NT and advent of Internet Explorer Bill had clearly reached his goal.

When a Business Becomes More Than Just a Business

The idea of doing something more with the wealth generated by Microsoft came about while the couple was on vacation in Africa in 1993. It’s proof of the importance of taking time off from work – something that Mr. Gates was doing little of at the time. Melinda has stated that they had discussed philanthropy before but it wasn’t until that trip that they started to line up their dominoes toward a larger vision.

After their experience in Africa, giving back became more than a desire. The couple saw it as a responsibility. They knew they could harness Bill’s success in business to do more than just make money. Though the foundation wasn’t officially founded until 2000, Bill and Melinda began brainstorming ideas before they even got back to the states.

Great Success in All Endeavors Starts With Enthusiastic Passion

Mr. Gates has openly admitted that they were naïve when they began to plot out the path of the foundation, but what they lacked in understanding was made up for with enthusiasm. This passion was the driving force, as it often is with any big idea. Without it the Bill and Melinda Gates Foundation never would have existed.

However, Bill did use his collaborative experience in the business world to move mountains with the foundation. Bill credits Microsoft’s success to his strong partnerships with co-founder Paul Allen and CEO Steve Ballmer. His strong partnership with Melinda, and their ability to play off of each other’s strong suits, has been a factor in the foundation’s success as well.

Their efforts have largely been focused on helping solve global medical problems that affect children and improving education in America. As far as their U.S. initiative, the focus is on making equal opportunity through education a reality for every student, not just the ones in good school systems. Bill and Melinda chose this initiative because they realized the ability to receive a good education was the first domino for their own success.

Once they found their cause – their ONE Thing – they continued to knock down the dominoes they lined up, overcoming obstacles and accomplishing larger goals in succession.

In the TED interview Bill mentions that one setback can’t unravel all of the effort and work that’s been done, whether you’re helming a philanthropic foundation or business venture. The measurement of success is how well you are achieving goals and making progress. The foundation has had failures in their search for better vaccines and better educational structures, but those failures were opportunities for learning what actually works.

Even Philanthropy Has Its Critics If It’s Connected to Business

In the past we’ve discussed the powerful impact that corporate social responsibility and giving back can have on a company’s bottom line. Philanthropy and giving profits away can actually help a business grow by way of improving public sentiment and support.

The Bill and Melinda Gates Foundation has become so influential that it is now a part of Microsoft’s business identity. Some have argued that this has helped Microsoft financially. While that may hold some truth, consumers will quickly catch on if philanthropy is done strictly as a business strategy.

Just like Microsoft, the Gates have found huge success with their foundation. To date, the foundation has devoted $34.5 billion to helping people around the world by supporting research and development as well as implementing strategies that were found to be effective. As a result, their vaccination projects alone save the lives of thousands of children every day.

Today, the foundation is the largest of its kind in the world. However, an even more telling sign of the foundation’s positive impact is Warren Buffet’s announcement that he will donate 80 percent of his own wealth to the Bill and Melinda Gates Foundation. Together the three billionaires have inspired 120 of their peers to donate at least half of their fortunes to help save the world.

With the Gates in the driver’s seat they might just succeed.

← How to get back on track with your New Year’s Resolution Goals Fitness Tips with Ally Davidson →
We use cookies to ensure that we give you the best experience on our website. If you continue to use this site we will assume that you are happy with it.OkNoPrivacy policy