Give Yourself Permission to Fail, Set Yourself Up for Success 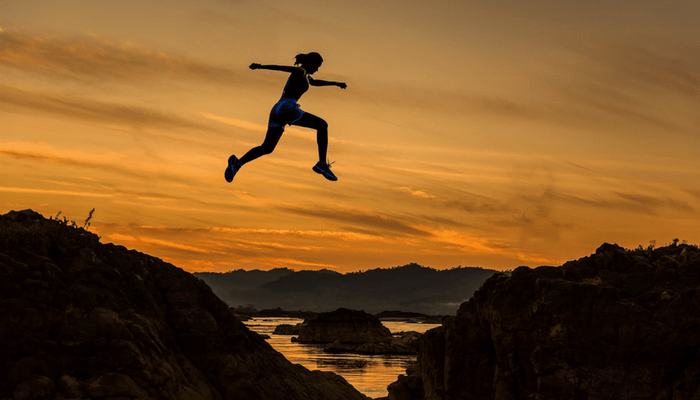 As you look back and see last year fading into the rear view mirror, there’s a good chance you’ll realize you’ve failed at some point. If you haven’t, then there’s an even greater chance that you’ve squandered a good opportunity to grow.

If you’ve ever caught The ONE Thing author Gary Keller on the speaking circuit, you’ve probably heard him talk about failure and how important it is for achieving our ONE Thing. Keeping ourselves from making mistakes is a disservice to progress. Doing so holds us back from achieving our full potential, and in many cases, prevents us from ever understanding what that might even be.

It’s true what they say, failure is a step on the path of success. The moment you fail is the moment you’ve found new territory to take or ground to cover. If we never fall down, skin our knees, and sweat, we’ll likely never get anywhere at all. When it comes to our businesses and our entrepreneurial endeavors, having a fear of failure is a good way to keep yourself from ever getting off the ground.

When psychologists talk about the fear of failure (or atychiphobia), what they’re really talking about is the fear of shame. And if you think about it, they have a point. What most often keeps us from taking a step forward isn’t a lack of desire, it’s an unwillingness to find out if we have what it takes.

It’s “armchair quarterback syndrome”. As long as we’re sitting on the sidelines, we don’t have to face the consequences of missing the winning shot, but we can always believe that if given the chance, we’d come through in the clutch.

And that’s just about the dumbest fear anyone could ever cook up for themselves. Ever.

When we maintain this type of egotism about ourselves, we go out of our way to protect our self-image. Whether it’s self-sabotage, some types of anxiety, low self-esteem, or a perfectionist persona—we go out of our way not to actually do anything at all. The problem with this lack of action is that it prevents us from ever realizing our full potential.

We have to put ourselves out there.

Success is never perfect. Nobody, and we repeat nobody, ever did anything worth doing without failing first.

Penicillin wasn’t discovered because some guy drafted up the perfect plan for an experiment that would result in an outcome he already knew he would occur. No, penicillin was discovered because Dr. Alexander Fleming messed up. While collecting samples of staphylococcus, he left one petri dish uncovered by accident just before going on vacation. When he came back, he found that mold had grown in that dish and was actually killing off the staph bacteria. Do you think he’s ashamed of having stumbled upon one of the greatest medical discoveries in history? Fat chance. He worked hard and failed his way forward, landing him right where his work was taking him.

Overcoming the gut instinct to play it safe isn’t easy, however. Especially when we feel like something valuable is on the line. But lucky for us, there are four tried and true tools we can equip ourselves with to help us overcome our irrational fear of failure:

1. Leverage the Support of Those Around You

It’s true that you are who you surround yourself with. In 2007, Harvard researchers analyzed a social network of over 12,000 people and found that your likelihood of becoming obese increases by 57 percent if you have friends who also become obese. If it matters that much to your physical health, imagine what kind of an impact it has on your mental health.

Surrounding yourself with the right support whenever you embark on a quest for failure is important. Put people in your life who aren’t afraid to mess up or get dirty, and you may find that some of your fears surrounding failure will disappear. Falling flat on your face just doesn’t have the same sting when you’re not the only one doing it.

Getting into a good failure group, or mastermind, works wonders for getting past mental road blocks between you and success. It also offers you that little extra motivation and sense of safety that is sure to not only help you take those important steps, but pick you back up when you fall.

Learning to fail is a thing. If we don’t give ourselves ample opportunity to fail, then we have no chance at getting better at it.

If you haven’t seen Star Trek II: The Wrath of Kahn or J.J. Abrams’s reboot Star Trek, you should probably stop reading this article right now and go do that instead. (Or at least, just watch the first thirty minutes of each film.) For those of us who have seen it, you may remember the Kobayashi Maru test. It’s a simulation that all potential captains are required to take that is designed to shake their spirits by putting them in an impossible circumstance. They’re given command of a ship that, no matter the decision they make, is doomed to destruction. Those who show mental fortitude and outstanding character in the face of failure earn their long sought after prize. And those who don’t, well, let’s hope they don’t become red shirts.

In philosophy and psychology this type of scenario is simply called a no-win situation, and despite what Captain Kirk says, life is filled with them. And even though we may view them as a bad thing, they can be useful tools to help us learn how to fail.

No-win situations don’t have to be life and death either. If we are faced with an extraordinary level of difficulty, whether it be a large gap in knowledge or skill, the feeling can be the same.  If you like to dip your toes into the pool of failure before diving in, pick up a small hobby that you have absolutely no prior skill or knowledge in. Whether it’s learning how to play chess by challenging grand masters, painting a beautiful landscape with Bob Ross, or learning a new martial art, where all you do is get your butt whooped, nothing helps us see the benefit of stumbling our way forward more than practice.

Let’s face it, failure is always a tough feeling to swallow, but it really isn’t fun when it comes to something you care about. It helps to know that each step forward (and backward) gets you that much closer to your end goal. That’s why it’s important to line up your dominos so you know that the ultimate reward is worth the effort you’re putting in along the way.

When you set up a really big goal, one that’s going to push you and cause you to fail, it’s important that you break down the steps to getting there. We call all of those steps leading to what you want to achieve “dominoes”. Because once they’re lined up and you start knocking them down in succession, your efforts are compounded.

To help you figure out the steps to achieving your biggest goals, we’ve put together a little guide that you can download for free by clicking here.

What we measure improves. The only way we can truly get better at anything is if we make a commitment to understanding where we currently stand and how we got there. It’s not enough to fail, you have to know why you’ve failed.

Keeping a notebook of all of your failures isn’t a bad idea. This is especially helpful if you’re working on a long project where it’s handy to go back and understand what you did, why you think it worked, and what you can do better next time.

The key here is to not let yourself fall into the “Hindsight Trap”, where you focus too much on what should have happened instead of what can happen. This type of thinking leads us to a dead end. When you’ve tripped over a shoelace, the last thing you do is wail over your mistake. You pick yourself up, tie your shoes back up and move on. Stay fixed on what you can do to improve and on what you intend to do differently the second go around, and you’ll put yourself on a path for growth.

Failure is a bit of a misnomer here. You’ve only really failed if you’ve given up. In addition to these four tools, try to keep a healthy mindset and think in the long-term, not the short-term. Sure you may have skinned your knees this time around, but that was just a part of getting to where you want to be. By keeping everything in perspective, you’ll be setting yourself up for the best possible chance at experiencing success.

← 40% of Americans Forgot Something Important in 2017, Don’t Be One of Them! The Road to MLK's Most Powerful Speech →