How and Why Johnny Appleseed Died a Wealthy Man 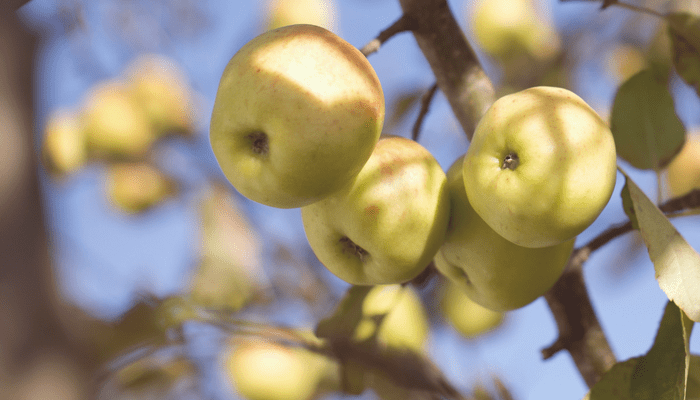 There are a number of legends living in the hearts of Americans everywhere, but none are as wild as Johnny Appleseed (Sorry, Wild Bill). With a tin pot on his head and a bag of seeds in his pocket, this nomad is said to have wandered the western United States planting apple trees for no particular reason save his love of apples. However, the truth is a little more purposeful.

Not everyone knows that Johnny Appleseed was a real person, and while the tales surrounding him are large, they pale in comparison to the truth.

In 1792, Ohio Company of Associates granted homesteaders 100 acres of land if they ventured further into Ohio’s wilderness. Even though the path was laden with hard work and dangerous terrain (not to mention bears), the simple prospect of living a new life in a new part of the world oozed with opportunity (and bears). The one catch was that in order to prove that they were homesteading, settlers had to plant 50 apple trees and 20 peach trees within three years of claiming their land.

A nurseryman by trade, John moved westward ahead of others, and developed nurseries with the intention to sell his trees and services to people as they arrived. Before long, he had a booming business on his hands, growing apple trees and teaching others how to tend to them. Over the years that followed, he left the nurseries in the hands of others and move on to other frontiers, coming back every now and then to check up on his business.

By the time of his death, he was a wealthy land owner, holding nearly 1,200 acres in his name. Now, if that was all there was to John Chapman, it’s doubtful he would have ever achieved legendary status. His story would have faded into history with countless others who found new ways to become rich. But John understood that wealth isn’t measured in dollars or acres, and that took his life in a unique direction.

What it Means to be Wealthy

Like The ONE Thing author Gary Keller says, being wealthy simply means having the means to finance your desires. Determining what you consider to be “wealthy” is a matter of personal journey and self-discovery. For John Chapman, contentment and “wealth” came from the simple things in life.

John was a conservationist who held and exercised a strong belief that all living things on Earth should be cared for. His beliefs gave him fulfillment and spearheaded his simple, minimalist lifestyle—and it was in that, that his legend grew. From wearing a tin pot on his head to serve as both protection from the sun and a cooking utensil, to healing a wolf’s broken leg and later welcoming it as a pet, John’s legend grew through his passion for all living things.

In fact, there’s a reason behind that fabled sack of apple seeds he carried. John believed grafting, the process of growing apple trees using the buds of existing trees, was harmful to the plant. This belief, influenced by his passion, had a profound impact on apple trees in the United States. As referenced in The Botany of Desire, author Michael Pollan credited John’s decision to grow trees using seeds with creating not only the delicious and the golden delicious apple, but also the “hardy American apple.”

The Legend Outlives the Deed

Contrary to popular belief, most of the trees Johnny Appleseed planted weren’t good for eating. He most commonly planted “spitters”, which were tart apples used for making a variety of goods, most commonly cider and applejack. Sadly, not long after prohibition passed, the FBI chopped down apple orchards across the United States, including the trees that Johnny Appleseed had planted.

Only one of Johnny Appleseed’s fabled trees survives today. Despite the tragedy, his legacy still marches on.

When we bring our purpose into focus and make exercising it our priority, BIG things happen. Often, as was the case of John Chapman, we inspire others to lead their own extraordinary lives.

If you’re looking for a new direction in life and are trying to figure out what your ONE Thing might be, we can help you on your pursuit. Start by downloading the My Purpose Workbook and work through it at your own pace. By taking the time to explore what you’re passionate about, you’ll be one step closer to creating your own Johnny Appleseed scenario in life – and living the largest life you possibly can.

← Yes, There is Such Thing as a Stupid Question Are You Feeling Lucky? How Successful Entrepreneurs View Luck →