My Personal Everest: or How I Overcame My Fear While Covered in Sweat, Mosquito Repellent and Drywall Dust 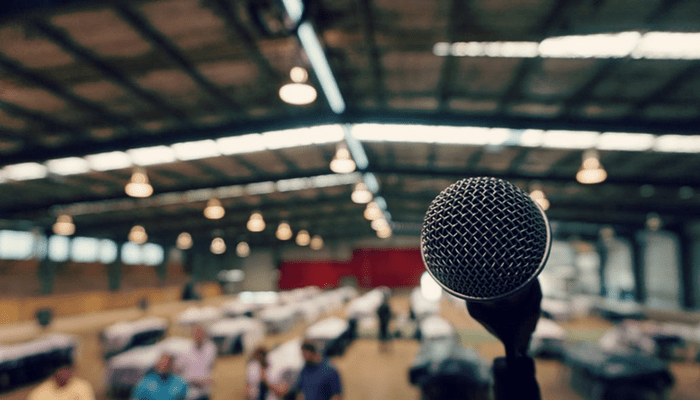 During my first day at Keller Williams Realty International, I pulled a toilet out of a wall and trudged through sewer mud, but that wasn’t the craziest part of my week.

The craziest part happened after a conversation on the bus ride back to Austin from the Hurricane Harvey-flooded streets of Houston where 4,000 Keller Williams agents and I spent the week delivering aid to those in need.

“What is the ONE Thing you want to work on while at Keller Williams?” Craig, the bus leader, asked me.

My dream is to one day be a speaker in some capacity. A teacher of sorts. A leader. I did not know it at the time but telling him my secret aspirations would end up being my first mistake.

“Anxiety. Stage fright. Whatever you want to call it. I freeze up, black out, and forget to breathe. It’s gotten better, but still, it’s not pretty.” I answered. That probably didn’t cover the half of it: the sweaty palms, the apprehension bubbling in the pit of my stomach, stumbling over what to say. Public speaking was my own personal Everest – something I wanted to conquer, but often submitted to.

Craig looked at me for a beat. “Pick a number between one and ten.” He said.

“Nine?” This was my second mistake.

I saw in his eyes that he wasn’t going to budge. I couldn’t plead with him like I pleaded with my project-mates and professors in school. I knew that he didn’t care if I got up there and passed out into the bus driver’s lap. I was going to stand up and raise that money.

But, I couldn’t stand up. Instead, I curled up into a fetal position while I came to terms with my future. Maybe I could stay here. Maybe if I stayed curled up long enough, I wouldn’t have to get up in front of everyone, people I didn’t know, and try to talk to them. The more I thought about that, the more I realized that by refusing to do this, I was actually just standing still. But not moving doesn’t stop life from happening. In the end, I couldn’t run, I couldn’t hide.

So I took my place at the front of the bus and willed myself to look out onto the crowd of people who were no doubt already irritated that I was disturbing their much deserved peace and quiet. They were covered in blood, sweat, tears, and drywall dust. The last thing they needed was some bumbling fool trying to take their money from them…even if it was for a good cause.

Craig handed me a microphone. Great, I thought, now everyone on the bus will be able to hear me wheeze at full volume.

I nervously looked around for anything I could auction off. All we had on the bus was left-over Chick-fil-A. I picked up a greasy paper bag.

No one bid. No one even said one word. They just watched me.

Even though I felt things were going south, I had an aha moment. I realized that this was such a different experience than I had ever had in front of people. I couldn’t flee, I was stuck there. Plus, Craig was not going to let me stop until I reached my goal. So, I stood my ground and just…breathed. I got comfortable, and moved around. I engaged with my “audience.”  I didn’t feel so alone up there. I told stories and had conversations. I looked people in the eye. From that point on, my fellow bus-riders opened up as well. They engaged with me, and then, one by one, they lent their resources to the auction. Slowly, money started to trickle in. $100 here, $200 there.

About an hour into the auction, we had people calling from all over the country to bid on items and to donate their resources. The bus was full of life, and so was I.

Craig and everyone else on the bus reminded me that I wasn’t alone. Through that experience, I found that knocking down dominos is so much easier when others are there to encourage and support you.

I have had public speaking experiences since, and, yes I still get a bit nervous, but I have completely changed how I approach them.

Instead of looking out into the crowd and seeing enemies, I see people who I can help knock down their dominoes, and who can help me knock down mine.

← What Not To Wear: Why Your Wardrobe Choices Matter More Than You Think From First to Worst, Why it Pays to Start with a Bad Idea →