Revisiting the Myth that Big is Bad 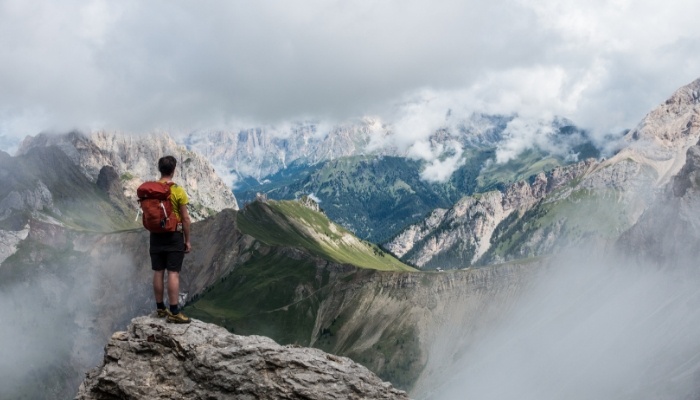 There’s a little-known fact that the section of The ONE Thing called “Big is Bad” almost didn’t make the final cut of the manuscript. It wasn’t until getting some last-minute buy-in from everyone involved in the project that it was placed back in the book for publication. And that wasn’t as easy as you might think.

To be honest, it’s not a limiting belief we’re likely to encounter until we’re faced with the tough decision between moving forward or staying put. It’s more common on the path toward success as opposed to something people face in the beginning of the journey—before facing the reality of what it actually takes to pursue your ONE Thing.

We always seem excited by the prospect of bigger things: big houses, big lives, big careers – but the reality of “BIG” can, at times, be paralyzing and prohibitive. Building a big life means challenging ourselves and risking control. Big takes on a life of its own, looms overhead, and seems like an exhausting and risky mountain to climb.

To be honest, we all find the prospect of BIG to be a little terrifying. In fact, this fear is so common we’ve even coined a term for it: megaphobia. What’s important isn’t whether or not that we consider the concept to be terrifying, it’s that when faced with a choice to grow or stagnate, we have the courage to press forward.

You Don’t Know Your Limits

People aren’t always the best at objectively knowing themselves. And, when we’re already uneasy by the idea of something, it can be incredibly easy to assume our goals are beyond our capabilities. So, instead of trying to stretch ourselves we simply go for the low hanging fruit. After all, if we set our sights on a goal that seems manageable, we’ll be certain to accomplish something.

But accomplishing something easy isn’t where growth and big results lie.

In The ONE Thing, we ask the question: Do you know what your limits are? 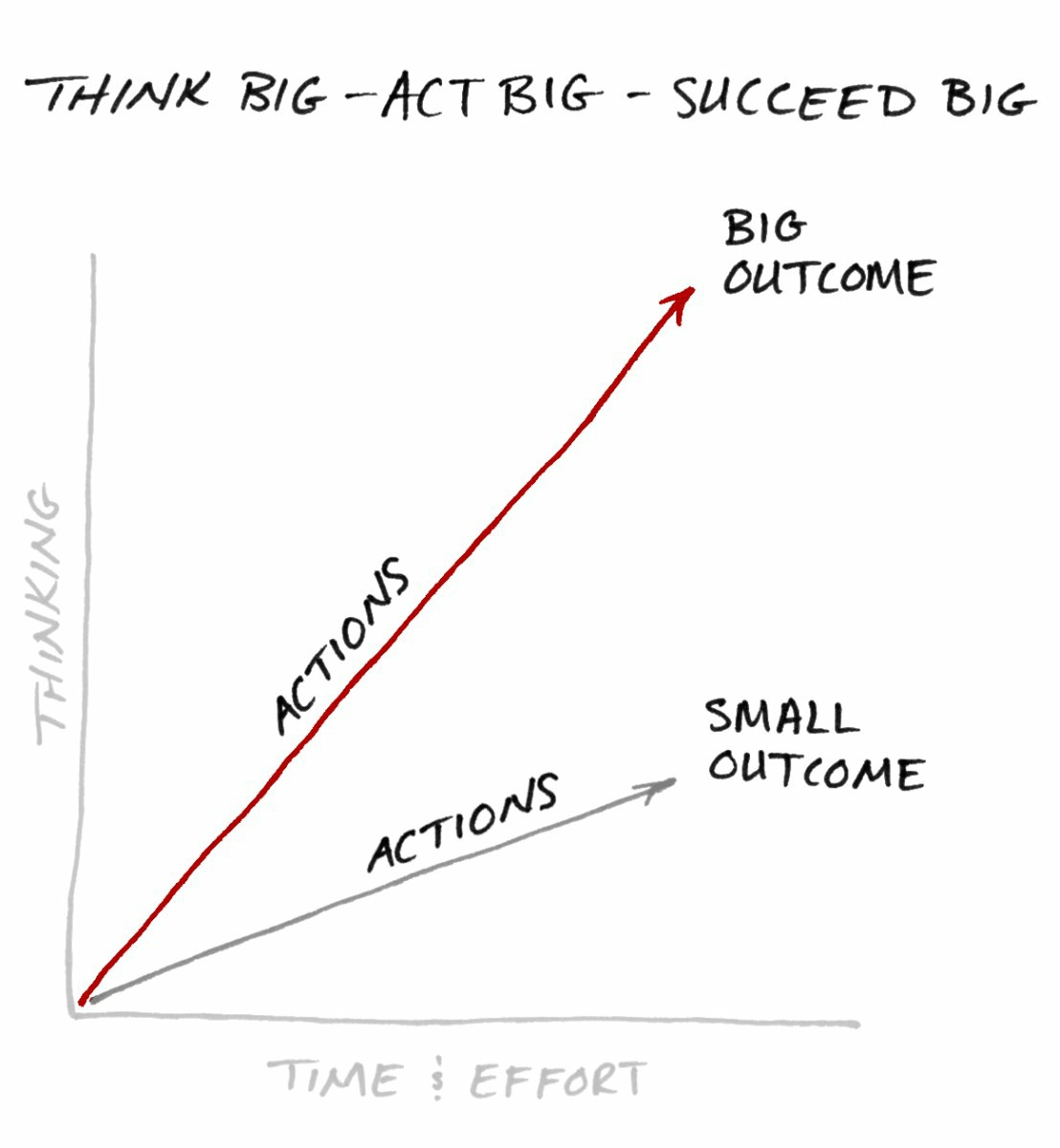 The answer is you don’t. And you’ll never find them if you simply aim for the smallest, easiest achievements. Instead, we need to focus on the larger realm of possibilities. For instance, if you’re in sales and you want to set a goal for selling more this year – five more units seems like a very appealing goal. It’s definitely something you know you can manage. But it also sets a ceiling on how much you’ll achieve.

But what if you decide you’re going to become a salesman who sells 100 extra units this year? That’s a much larger goal to hit that requires more serious thought and commitment, an adjustment of strategy, and new, stronger habits.

Setting BIG goals and aiming for a BIG target changes our mindset in ways that helps us achieve far more than we initially thought was possible.

By raising your ceiling of achievement, you’re giving yourself more room to grow. Sure, you may not hit 100 sales – but what if you end up selling 75? That’s 70 more than the five you would’ve originally sold. Moreover, you’re pushing yourself to expand your business.

There’s a saying that I’m sure many people are familiar with: “shoot for the moon because, even if you miss, you’ll land among the stars”. The same holds true for the goals we set for ourselves. If we only ever think small, we’ll never ensure that we find our potential.

But if we set goals that are big, even if we don’t meet them, we’re allowing ourselves to fully stretch and find our limits. Moreover, once we start testing our limits, we often find they aren’t limits at all. They’re just obstacles on our way to bigger, better things. Because when you accomplish big things, your life, your abilities, and your outcomes get bigger, too.

Look for Something to Model Your Success On

It’s rare for any human to discover completely new territory and, even when we do, we usually don’t go into a situation completely uninformed. If you decide to go climb Mount Everest tomorrow, you’d more than likely read up on past climbs, learn about the mountain, and hire people to help guide you along the peak. Our path to success can be the same – we don’t have to just make things up as we go along.

Whether we’re wanting to become better partners, expand our business, or create better habits – there are always people out there who have paved a way forward. While we don’t have to find an exact match for what we’re trying to accomplish, it can be useful to find examples and build on the success of others.

Take the time to research people or businesses that have done what you want to do. Ask yourself what are some things these people had in common? What time did they wake up? What tools did they use? What skills and habits did they invest in? Were there patterns of behavior or models they used to get where they went? Once you begin breaking down what it is successful people have done, you can create your own working model for success.

Just because you have big goals doesn’t mean every action you take needs to be big, too. In fact, that’s entirely unreasonable. When we have set big goals for ourselves, the best way to make sure we stay on track to accomplish them is to go small. We need to find our two-inch domino and knock it over in order to gain momentum and stay on the right track.

So, if you’re trying to hit a big goal and find yourself confounded by what to do next, take a moment and ask yourself the focusing question:

Let’s go back to Mount Everest, for a moment. If you decide you want to climb it, would you just… go climb it? No. That would be crazy. (And also probably very dangerous) So what would be your first step towards being mountain ready? If you’re trying to go from couch potato to adventurous rock climber, you’d probably need to focus on something small – like making 10,000 steps a day. That would mean creating new habits, like going on walks, putting in a standing desk at work, or taking the stairs instead of the elevator every day. 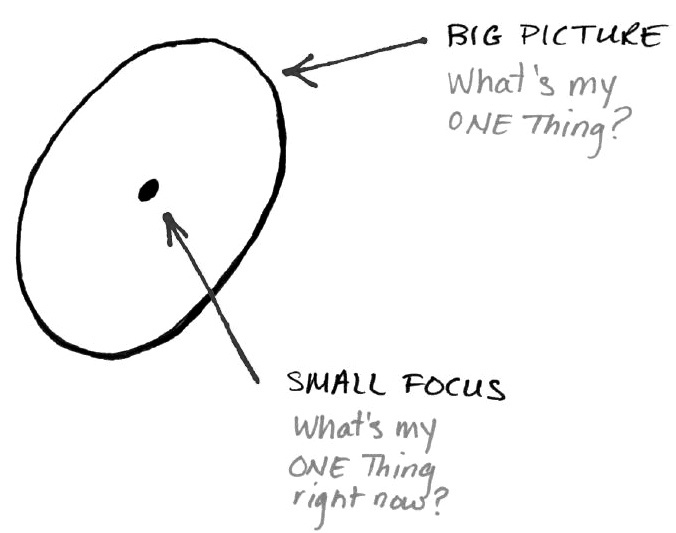 You have to learn to walk before you learn to run, and making sure our big goals happen functions much the same way. We don’t need to do something BIG to make something big happen. We just need to know what the one thing we need to do NOW in order to stay on track to accomplish our goals.

If You Still Don’t Believe Us…

Take a look at Eddie the Eagle. Born to working class parents in the 1960s, Michael Edwards was hardly what someone would picture when they said “Olympian.” Short, not particularly athletic, and sporting a very impressive pair of glasses, Eddie looked more the part of average office worker than sportsman. But much to everyone’s surprise, he had a very deep passion for skiing.

Unfortunately skiing (and all the equipment that goes with it) is a very expensive hobby. So after failing to qualify for a spot on Britain’s downhill Olympic skiing team in 1984, he decided to take up the (slightly) more affordable sport of ski jumping.

Not only that, Eddie was committed to go big: in just two years’ time, with no ski jumping experience whatsoever, he was determined to qualify for the 1988 Olympic ski jumping team.

And he made it. He took what little money he had and trained for awhile in States. He worked odd jobs to pay for extra training, gear, and time on skis. Leading up to the games, he was doing up to 60 jumps a day.

When it came time to qualify, Eddie made history by becoming the first British skier to qualify for the Olympic ski jump since the 1920s. While he didn’t snag the gold (in point of fact, he finished dead last in both of the events he participated in), he was able to prove everyone wrong by actually reaching his goal: becoming an Olympian.

No one thought a working class, un-athletic kid would ever become an Olympian, but Eddie knew what many people didn’t – if you aim high, you’ll be surprised by what you’re able to achieve.

← Embrace Personal Evolution, Invest in Yourself Why You Don't Have Time for a Side-Hustle →