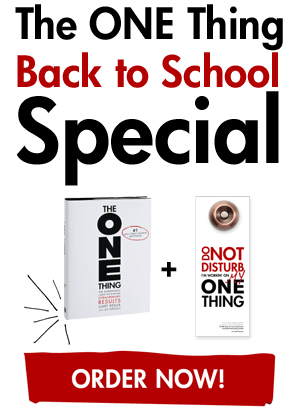 The counterbalance battle often begins sooner than we think. And, it’s never too early to take control of your future. That’s what students are saying this fall about the lessons learned in The ONE Thing. “As a college student, there is always something to do,” says 19-year-old Hogan Hudgins from Amarillo, Texas. “Half the battle is finding time to get everything done. The time management strategy I needed to take heed of was ‘not everything is equal’ – I can’t spend the same amount of time on Beginners Golf as Biology.”

Similarly, recent MBA graduate Gib Reynolds from Richardson, Texas, says understanding balance is a lie was one of the book’s messages that really hit home. “I started to make tough choices; time management became a necessity, and some things had to go.” Lucky for Gib, he had been privy to a few of Gary’s teaching sessions prior to pub date, which helped him realize the importance of prioritizing, time blocking and asking the focusing question. “When in school, my profession became ‘student,’ and I wanted to be in the top 1% because that would make everything else easier or unnecessary,” he explains. “I rearranged my entire schedule – 8am class everyday became my goal, not something to avoid.”

And speaking of focus, 20-year-old Danielle Walker from Kingwood, Texas, says until she read The ONE Thing multitasking had a positive connotation. “I have heard the saying ‘jack of all trades, master of none,’ but I never bought it till after reading the book,” she says. “Turns out when we multitask, we are working from a divided mind… we, in essence, water down all of the outcomes in this process.” Danielle suggests instead working from a clear sense of priority, and willpower plays a big part. “I always thought you could just drink three more cups of coffee and accomplish whatever you need to,” she explains. “I realized through the book’s teachings that there is a point where you need to stop and refuel because your willpower – like your cell phone – has a battery life.”

Want your student to get excited about success, start making new habits and build a geometric progression toward extraordinary results? Watch the back-to-school special below, and hear how The ONE Thing is shaping students’ futures through focus. Then share your own stories!