The Sport of Business 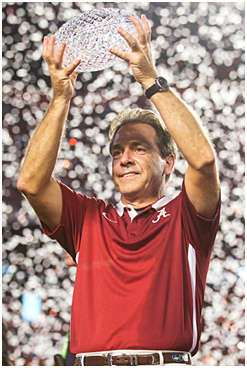 Many people will be on the couch watching their favorite teams battle for the chance at Superbowl Champions this holiday weekend. And, football fans nationwide will be looking to not only the players, but their coaches to pull the team through to that ever-more-elaborate victory dance.

So, we got to thinking, what makes a football coach great? His legendary defensive schemes or ability to push a team to new limits. Not really.

When it comes down to it, we base our coach’s merit not in total wins, but in his business skills – creating models and systems, building a staff, delegation, business strategy, motivation and time management, for instance. And, Nick Saban proves a valid example of this.

There’s a story that is frequently brought up in Forbes Magazine – which has recently achieved the status of folk-lore—about a set of dialogue between former Alabama Athletic Director Mal Moore and Nick Saban, where Saban reveals to his new boss that his greatest strength as a head football coach doesn’t involve any coaching at all.

Saban is said to have asked Moore during his first flight to Tuscaloosa, “What do you think you’ve got with me as a coach?” Moore, who had flown to Miami to pick up his new coach, reportedly stammered a bit and replied, “I think we’ve got the best coach in the country.” Saban is said to have replied, “No, you didn’t. But you got the best damn recruiter that ever lived.”

Newberg claims that recruiting process begins by Saban identifying his team’s future needs, planning for two or three years in advance – goal setting to the now. Sound familiar? After identifying those needs, he sets a standard at each position, identifying key characteristics for each position within each system the team runs. After identifying a list of potential prospects, he evaluates whether or not each prospect meets his set standards, and requires each coach to evaluate the potential recruits. The final phase of his recruitment, he says, is keeping a constant eye on potential talent that can fill his team’s future needs.

For Saban, there is no season for recruitment—it doesn’t begin after a win or loss. It’s a continuing process of self-evaluation and talent identification.

Make no mistake about it, establishing a recruitment system like Saban’s is a key step towards ensuring the growth and survival of your business in 2014. And with the new year approaching, now is as good a time as any to start following a similar recruitment model – putting emphasis on identification of team needs, standards, and potential talent that can meet your business goals. Here are some tips. 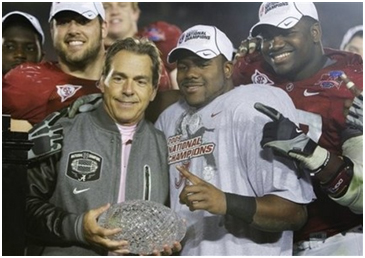 Three Things You Can Do to Recruit Like Saban

1. Identify your team’s current and future needs. This will give you a realistic view of where your business stands, and more importantly, where it is going.

2. Set strict standards for each role within your team. This is crucial; setting standards will help ensure that you hire the right talent for the right position. Putting talent in a role where they cannot succeed only creates frustration, and can result in turnover.

3. Establish a talent pipeline. Creating a talent pipe line is a lot of work, but it will allow you to be more selective when the time comes for you to make a new hire. If you haven’t started creating one yet, start by establishing an allied resource relationship with a business contact. Having an allied resource is a great way to find new talent.

As Gary says, the best place to learn business in a newspaper is on the sports pages. What other business strategies can you pick up from your team to make 2014 your best year yet? Share your ideas on Facebook and Twitter.