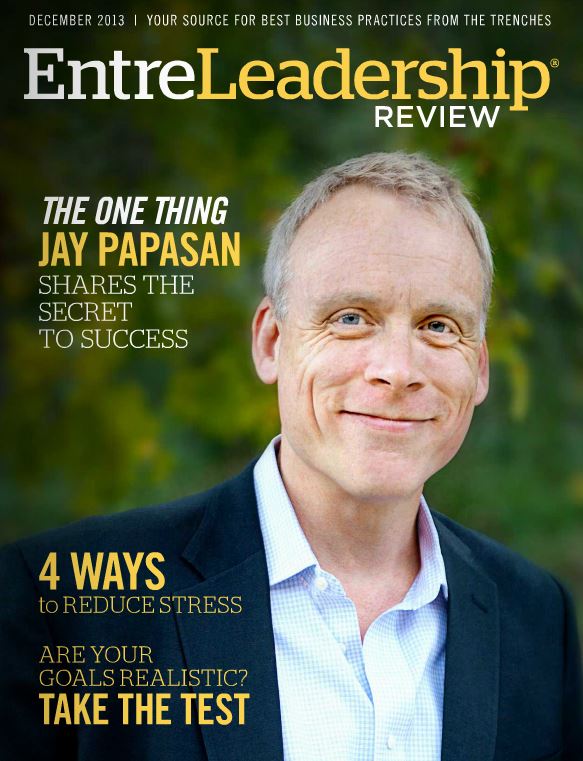 The start of the year holds so much promise and possibility. Will 2014 be the year that you create a domino effect for success in your life? The secret to succeeding in the New Year is ONE simple thing – focus.

Jay Papasan discussed the importance of focus in a recent interview with EntreLeadership’s Chris Hogan. He emphasized that when you identify and put focus on the ONE Thing that will make the greatest impact, everything else will line up. But focus doesn’t always come easily. Make this year your best one yet with four tricks to improve focus from that recent discussion.

Jay noted that for every yes or commitment that’s made there are a thousand nos that go along with it. When we set a goal for ourselves we have to protect it by giving it our focus and not letting other things take time away from it. That means no becomes a big part of accomplishing goals.

Don’t let little loose ends and non-essentials distract you from the big picture. Be willing to say no to keep your priorities in line and stay focused.

Too much on your to-do list? Resist the urge to multitask because it will do nothing but slow you down. When multitasking is eliminated and we focus on just ONE Thing at a time we actually get more done. Even going back and forth to emails can cut productivity by 28%. Switching between tasks requires a person to refocus, which takes time and energy that could be put to better use by focusing on getting things done one at a time.

Side note: you’re also less likely to get back to the original task, which makes those distracting loose ends pile up.

Time Block ONE Thing at a Time During Your Day

So, what’s ONE Thing you can do to get more focused during the workday? Time blocking is the key to prioritizing your to-dos so that your focus is put on what matters most and ONE Thing gets done before moving on to the next. It’s actually quite simple. Take a look at your calendar and section the day out into various time blocks depending on priority. Only one task is allotted to each time block. Not only will it help you to resist the urge to multitask, it will also help you increase your productivity by putting a deadline on getting a task done.

Something to consider when you time block is that our willpower to focus is strongest in the morning when we’re fresh and haven’t drained our reserves.

Habits greatly influence the level of success that can be achieved. The old saying, “You can’t teach an old dog new tricks,” is completely untrue. So is the idea that it takes 21 days to create a new habit. In actuality, it takes an average of 66 days to change something in your life and make a new habit. The 66 Day Challenge we held at the end of 2013 revolved around this very idea.

If you only create one new habit in 2014 make it to always ask the focusing question.

When you come to a crossroads in any facet of your life the focusing question will reveal the ONE Thing to focus on to get the most extraordinary results.

Check out the 66 Day Challenge and kick off 2014 by making a few changes that will put you on the path to success. Start by trying to make one of the suggestions above your next good habit.