Staving off the Boredom of Success 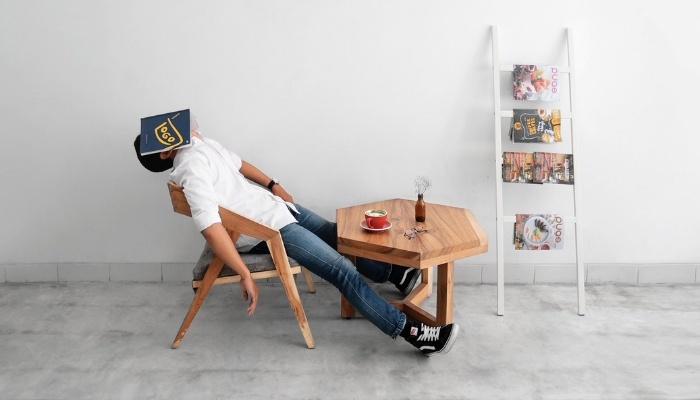 When I was five, I was convinced I wanted to be a model. As an adult who generally eschews trying on new clothes (thank you internet) or talking to strangers, I find this younger version of myself entirely perplexing. In what world would being a model be even remotely fun? But five-year-old me was not to be deterred, and I convinced my mother that with some headshots and an agent, I would be a modeling success.

And it worked. Armed with an unruly mop of red hair and a personality that could only be described as “hammy,” I picked up modeling gigs. At first, I found this process exciting. I got to go downtown after school and have “a Job” like a grownup. My picture showed up in ads and magazines. I was featured in a JC Penney catalogue. I was on top of the world!

But after a while modeling became boring.

The glitz and glamor of trying on Penney’s latest and greatest began to fade. I missed hanging out with my friends. I missed having dinner with my family. I found the million different poses tedious. I was successful, but I became bored with my success.

I’m not five anymore (or a model), but even at my most successful moments I can still find myself bored. We all do. Because success is repetitive.

Think of how many auditions a movie star has had to put themselves through. How many times a professional baseball player has taken batting practice. How many phone calls a successful sales person has dialed. Or How many times comedians test the same joke over and over before getting it “just right”.

When you look under the hood of people who have achieved extraordinary success in their fields, you’ll always find that they have a habit of doing the same things again and again and again and again. They’ve found what works and they keep doing it, over and over again. And often, the difference between their ceiling of achievement and ours is that they’re able to stave off boredom long enough to allow themselves the chance to succeed.

If you’re struggling to find excitement in the day-to-day activities that drive your success, doing something different that is in alignment with your goals can be a sure-fire way to stay engaged with your job. Instead of throwing in the towel or looking for greener pastures, try the following:

pation. Have you ever found a song on the radio you really loved, sang in the shower, and played over and over until you grew sick of it?

In psychology, the phenomenon is a part of a process called “satiation.” When we find something we love, we want to consume as much of that thing as possible as a means of satisfying our desire. Once we’re satisfied, we no longer need that thing. So, we toss it to the side.

According to Wharton’s Barbara Kahn, anticipating variety is a great way to curb satiation. While there’s a ton of joy to be found in anticipating an event—like planning a road trip or a special dinner—there’s also a lot of excitement when we simply visualize the various experiences we’ll encounter in the future.

It’s a lot like all of those old cereal box prizes we used to get as kids. Every now and then, the toy pictured on the front of the box wasn’t inside the package but would be given to us once we mailed in a certain number of UPCs. With the promise and anticipation of getting some pretty radical toy like moon shoes or x-ray specs, we’d clip all of the UPCs after each purchase, take special care to save them, and mail them to a P.O. box somewhere out in Toyland. Each step that brought us closer to the toy was exciting. And every moment we spent waiting for the mailman to bring us our prize was equally thrilling.

The toys themselves? Well—it was usually the case that the pain wasn’t worth the plunder. But that’s not the point. The point is that if we keep an end-goal in mind and connect the dots to how what we’re doing today will impact what we’ll do or have tomorrow, we’ll effectively stave off the boredom of satiation.

When looking at our daily routines, build a habit of encouraging anticipation.

Keep a 411 and track your daily or weekly results. Break up your goals into tasks that show progress toward ultimate success. That way, instead of it becoming a daily, repetitive task that gets stale, you’ll keep it fresh by building anticipation for the time you do get to do it.

Give Yourself a Break

As the amount of time kids spend engaged in unstructured playtime has diminished, so have their grades.

According to the American Academy of Pediatrics, children need to have downtime between “complex cognitive challenges.” By taking a break, their brains are better able to break down and process information, deal with stress, and handle returning to class for more work.

Much like sleep, our waking hours follow a particular cycle – the Basic Rest-Activity Cycle. Discovered in the 1950s by Nathaniel Kleitman, this cycle showed that most people move from light to deep sleep at intervals of 50-90 minutes. During the day, our energy wanes in much the same way. But, more often than not, when we begin to show signs of mental fatigue, we don’t pump the breaks. We turn on the coffee pot and burn some midnight oil.

According to famous psychologist Anders Ericsson, that’s a problem. In the 1990s, Ericsson performed a series of studies on top performers – from athletes to violinists – and found that taking breaks from practice was an integral part of peak performance. After about 90 minutes, when energy began to wane, people needed to take a break (be it a nap or a lunch break) in order to maintain their efficiency and effectiveness.

We already know that scheduling our most important work in the morning, when our energy is at its peak, is important. But scheduling regular breaks is important, too. Like kids at recess, we need to give ourselves mental space to process what we’re doing, learn, and regain energy.

If you find yourself sitting at your desk feeling bored, lethargic, and unable to concentrate – take a minute to do something completely unrelated to work. Grab a quick snack to improve your energy, do something that flexes a creative muscle, or go for a brisk walk. If you find it difficult to find a moment for a break in your day, time block them!

After every 90 minutes you spend working on one task, make sure to set aside a ten to fifteen-minute window where you focus on something else. That way, you’ll make sure that you’re giving your mind and your body the break it needs to refocus.

And if ninety minutes of willpower feels unattainable, keep in mind that shorter bursts of intense productivity can also be extremely helpful. Work on your most meaningful work for a twenty-five minute period and follow it up with a short breather. By training yourself to work in concentrated bursts, you’ll increase your attention to the work at hand and be better able to ward off distractions.

And more importantly, it will add some variety to an otherwise boring schedule.

When nothing new happens, we tend to disengage. And nothing new might be happening because we aren’t challenging ourselves. We might be living in the comfort zone (which is like the Twilight Zone, but less mysterious and less comfortable). 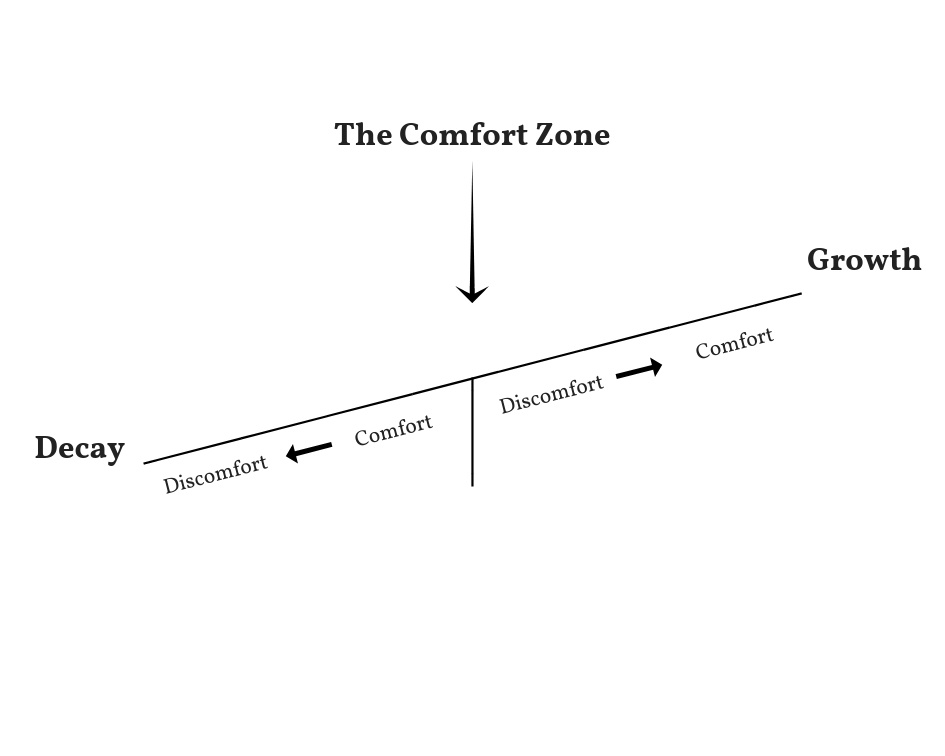 The comfort zone is an artificial bubble. A place where we feel safe and secure and successful. At least for the moment. But we can’t stay there forever, the novelty of solving the same puzzle over and over only lasts for so long. We get bored, restless, unhappy with what we achieve. And as a result, we become dissatisfied with our lives.

Staying in our comfort zone is both unproductive and impossible to sustain. For one thing, we end up stuck in place. And while we aren’t necessarily losing ground, we aren’t gaining ground either. We are simply hovering, perched on a tiny ledge attempting to maintain balance. And like we talk about in The ONE Thing, balance is a myth. Instead of achieving “stasis”, we backslide. To keep ourselves from falling backward, we have to instead move forward.

Once we’ve exhausted all of the blood, toil, sweat, and tears we have to give, we have to find the will to do it all again. Growth requires discomfort. It requires us to lift more weight, to fail amidst new landscapes, new problems and experiences. It’s what gives us the strength, wit, wisdom and wherewithal to achieve our full potential. It’s what makes life exciting!

If you’re finding yourself feeling bored, it may be time to stop and reassess where you’re at. Are you bored because things are just repetitive? Or are you bored because you’re not being challenged? If you’re living in your comfort zone, it may mean it’s time to step outside and try something new and more challenging: create a BIGGER goal, throw yourself against a wall—learn something new.

Boredom shouldn’t be the end of our success. In fact, it should be the launching point for better habits and new opportunities. If you find yourself feeling hemmed in with boredom lurking just around the corner, just remember that boredom is a choice and that you have the ability to inject some excitement back into your life and goals.